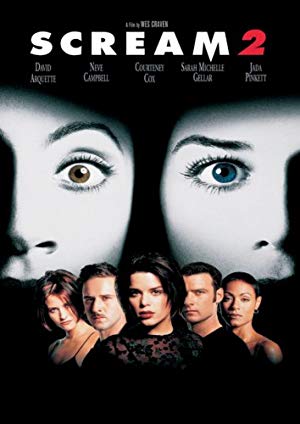 Plot: Two years after the killings in the first film Sydney is at college trying to have a normal life. however that doesn’t last long when knew killings start to happen.

There are certain rules that one must abide by in order to create a successful sequel. Number one: the body count is always bigger. Number two: the death scenes are always much more elaborate – more blood, more gore – *carnage candy*. And number three: never, ever, under any circumstances, assume the killer is dead. – Randy

Scream 2 is a solid sequel to the original. it has everything we loved about the first one and more. It may not be as good as the original but it is still fun to watch.

Scream 2 is just as self aware as it predecessor, at the beginning of the film there is a scene where a group of class mates (including Randy) have a discussion about sequels and how they are not as good as originals. I feel like this scene is true to the film as in its not as good as the first but its not bad.

The characters in this film for me weren’t as interesting as the original group of friends. I didn’t feel as attached to them. Also they decided to kill off one of the best character, Randy, in this one (honestly thought Scream 3 would’ve been better with him in it). But in the end its still a shock to see who the killers are. like in the first film it makes the killer out to be the boyfriend however that isn’t the case, I enjoyed the twist of it being Billy’s mother.

To sum up this film is worth a watch it has everything you liked about the first Scream film and as usual Wes Craven is an amazing director.  This is definitely one of the best horror sequels out there.

Note: Just a quick review today, the reviews for Scream 3 and 4 will just be quick ones as well and i’ll try to get those up tomorrow.

Thank you for reading!