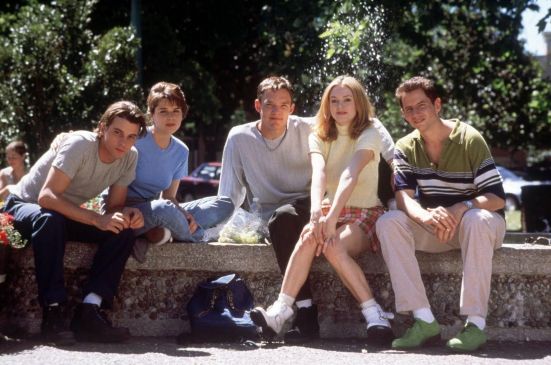 Plot: A year after her mothers murder Sydney and her friends are tormented by a masked killer who uses horror films as part of the deadly game.

Scream is one of the most original horror films out there today, its filled with references to other horror films along with a great set of characters that help to set the slasher film apart from the rest.

Scream is a very self aware horror film, it makes fun of the classic horror tropes while at the same time using some of them. for example when Sydney tells the killer that its stupid to go up the stairs not even five minute later she’s running from the killer…..up the stairs. What I love about this film is that all the characters know and at some point make fun of the horror tropes. One of my favourite characters has to e Randy who is the film geek of the group, he knows all the horror film rules and informs the rest of the group about them.

This film is scary and funny at the same time, a great example of this is when Randy is sat on the couch watching Halloween and he’s yelling at the screen for the women to turn around. while he is doing this Ghostface is creeping up behind him leaving us shouting at Randy to turn around. Its little things like that that make Scream stand out from all the other slasher films out there.

The characters are also another thing that made this film enjoyable. normally in slasher films like this the characters are cliche and boring but thats not the case here. The characters all have interesting personalities and are fun to watch on screen. At first it seems that Billy is the killer and we suspect him the whole way through, however seeds of doubt are planted in our minds to if its really him or not. I like that the film leaves us guessing who the killers are until the end, I also liked the twist of their being two killers, when I first watched the film I never guessed there would be two of them.

To sum up Scream is a breath of fresh air for the horror genre, with great direction from Wes Craven and a great cast of characters. This is definitely a film thats worth a watch if you haven’t seen it yet.

Thank you for reading!